A summer programme that moves between different disciplines focusing on our food culture. We present our first set of events that will activate our minds and senses, discovering how artistic strategies contribute to the discussion of the politics of food.

What does our food heritage look like and what is its significance in a time when our city becomes more diverse? Food can often be the first step into a culture and by working in collaboration with various designers, artists and chefs, we’ve arranged a festival that eats through different cultures.

Together we will discuss the politics of food and ask questions of how artistic strategies can contribute to the discussion of cultural heritage, migration and the political dimension of gastronomy. But mainly it’s all about having fun and eating good food!

May 10 — Dinner by Aydin & Vargö for invited guests from Invitationsdepartementet.

June tba — IRL, a storytelling event by HEXprocessen and an edible ice installation by Francesca Lusuardi at Brännkyrkagatan 13.

July 1 — New Cuisine, a workshop and talk at Hötorgsterassen with Ayhan Aydin, Matinstitutet and Roos Juten.

All you need to know

Tickets to our first event, a film screening on May 24th, are out now! Tickets to the rest of the programme will be released shortly.

If you have any questions, don’t hesitate to email us at hej@underverk.in. 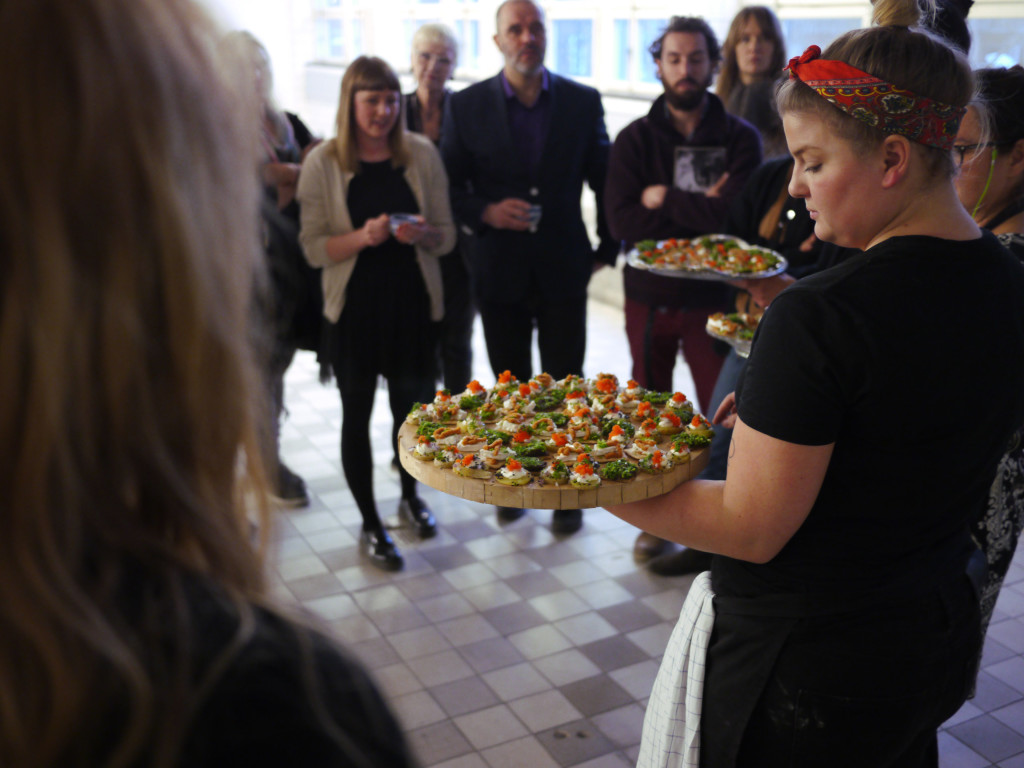 For Season 5 Underverk collaborates with curator Kim McAleese and together we present a series of food events spanning April and May 2015, which will focus on home labour and the gender divide in relation to domestic tasks (such as cooking, cleaning and maintenance). The projects will ask whether much has changed -if anything at all- since the feminist protests of the early 1970s.

The discussions and participation in the presented food events contribute a vital part of and act as the core material of the project’s research. The results and documentation will be presented in a printed matter acting as the final piece of the programme.

In Konsthall C’s kitchen, an invited commercial ‘chef’ and a domestic ‘cook’ will respond to the questions posed in the Mierle Laderman Ukeles’ Manifesto for Maintenance Art.

Produced in 1969, the manifesto connected to other feminist activities around the world which began to articulate the gendered inequities between paid and unpaid labour. The chefs Josefin Günther and Magdalena Günther are invited to make a dinner, using the food as their material to convey what they believe to be ‘maintenance work’ as an attempt to readdress the issues raised in Ukeles manifesto.

The dinner is part of the public program of the Ukeles exhibition at Konsthall C, the idea being that members of the public are invited to engage in some of her thoughts and artistic concepts over a meal in the space.

Josefin Günther is a sommelier currently working as a freelance writer. Food, beverages, scents and flavours have always been a very big and natural part of her life and she is always looking to add new scents and flavours to her palate. Finding new ways of expressing what we experience when we eat and drink is an ongoing home-project of hers.

Originally from Poland, Magdalena Günther came to Stockholm via Copenhagen where she attended a College of Arts. Her entire professional career as a graphic designer/art director has been spent trying to juggle work, family and social interactions. Her passion lies in exploring gastronomy and culture from other countries, and she has always cooked.

For many women, the home was a natural subject of artistic production as a highly charged site of rampantly contradictory meanings. As Lucy Lippard noted, ‘[women artists] work from such [household] imagery because it’s there, because it’s what they know best, because they can’t escape it.’

A set of feminist film screenings punctuate by food provided by meal ecologist Ayhan Aydin and experience designer Josefin Vargö, which is designed to create and host an environment to foster discussions.

In this film programme, the artists explore domestic issues such as motherhood, sexuality, death, familial relationships, control of physical space and the preparation and consumption of food.

We finish the season with a dinner to bring people together in a private and intimate setting to encourage an exchange of ideas regarding identity, work and activities in the domestic space. We invite a chef to lead the workshop and discussion. More information soon!

The first event for Season 5 takes place at Konsthall C and deals with the value of domestic work in the kitchen.

In Konsthall C’s kitchen, curators Kim McAleese and Josefin Vargö have invited a commercial ‘chef’ and a domestic ‘cook’ to respond to the questions posed in the Mierle Laderman Ukeles’ Manifesto for Maintenance Art 1969!

Produced in 1969, the manifesto connected to other feminist activities around the world which began to articulate the gendered inequities between paid and unpaid labour. The chefs Aaron Colman and Josefin Günther are invited to make a dinner, using the food as their material to convey what they believe to be ‘maintenance work’ as an attempt to readdress the issues raised in Ukeles manifesto.

Invited guests will be asked the same questions to encourage a discussion about gendered division of labour and how that looks today.

The event is free but has limited capacity – you can register your attendance, before 6th of April, at osa@konsthallc.se

With support from Stockholm stad and Konstfack/CuratorLab.

Photo by: Wages for Housework c.1975 Designed by B. Warrior

The program for UNDERVERK’s first season.

What is Terreno?
“We are a Swedish family who runs the winery Terreno located on one of the hills outside Greve in Chianti in Tuscany. For 25 years we have been producing award-winning wines and olive oil with a great sense of feeling and commitment. Located at Tereneo is also a holiday rental, wine shop and a restaurant.”

PICKS FROM THE GUIDE